The various parts of a fish’s body make it unique as an aquatic species, and when examined closely one can appreciate the necessity for each body part whether it has a significant or minor role in the fish’s livelihood. 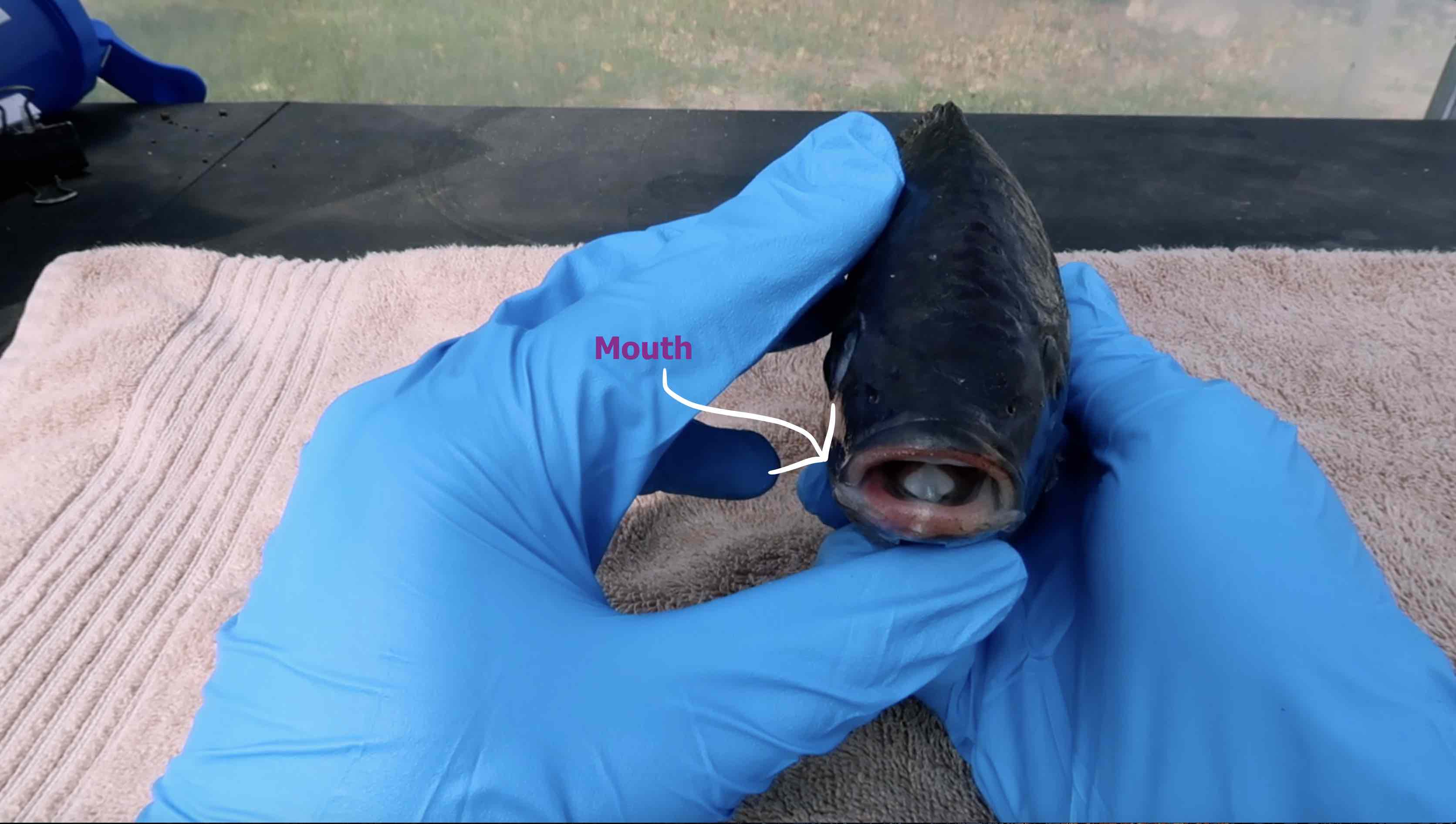 The mouth of a tilapia is made up of tiny conical teeth positioned in rows or bands that are used to hold food in place. At the touch of the finger one will notice the sandpaper like texture of their teeth which aids in the relatively powerful bite of an adult tilapia. 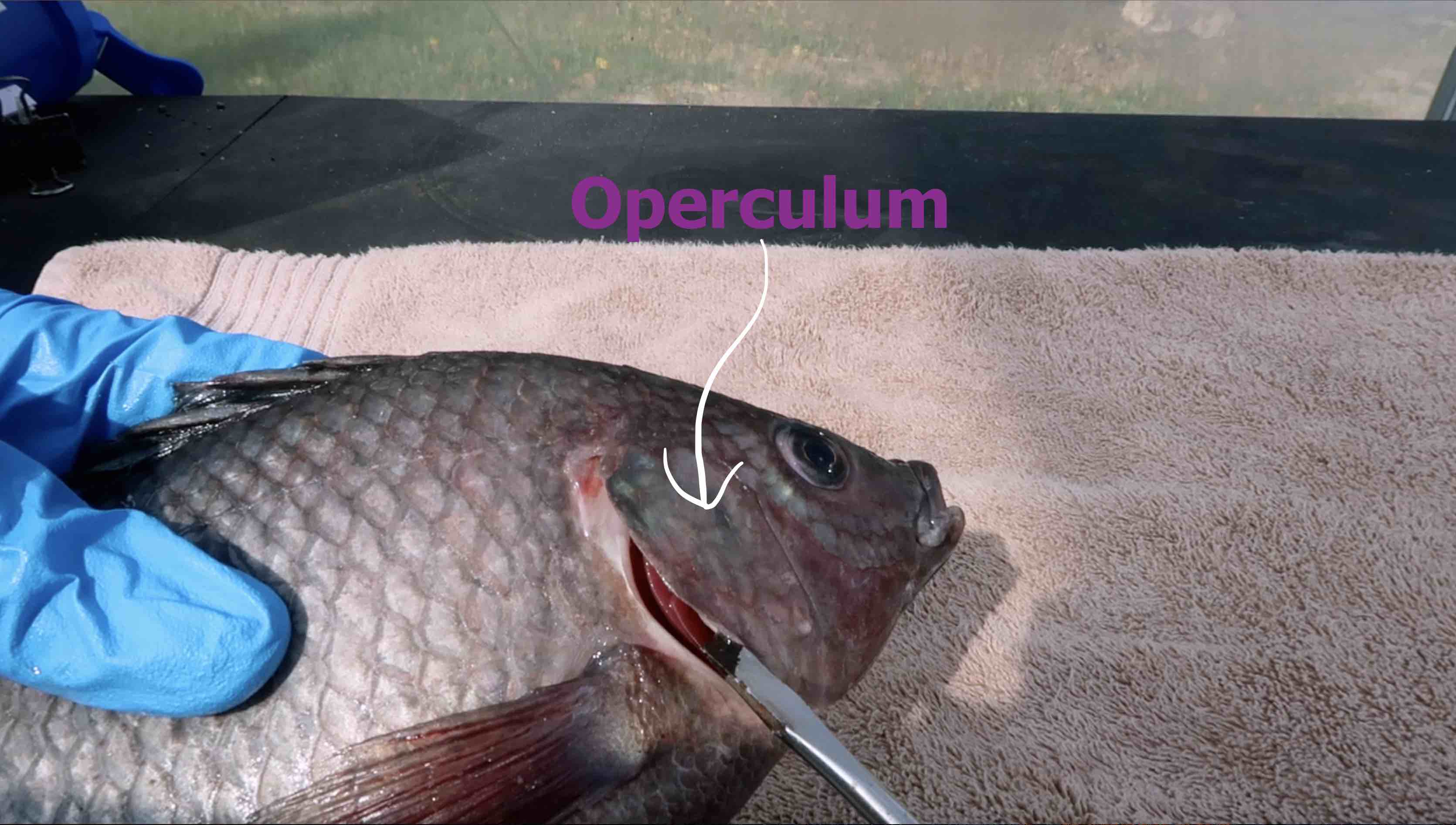 The operculum is a hard covered facial structure that protects the fish’s gills. The gills are soft tissues that function as a transporter of ions and water, and is the location where oxygen and carbon dioxide exchange occur, and is the primary site where ammonia is excreted. 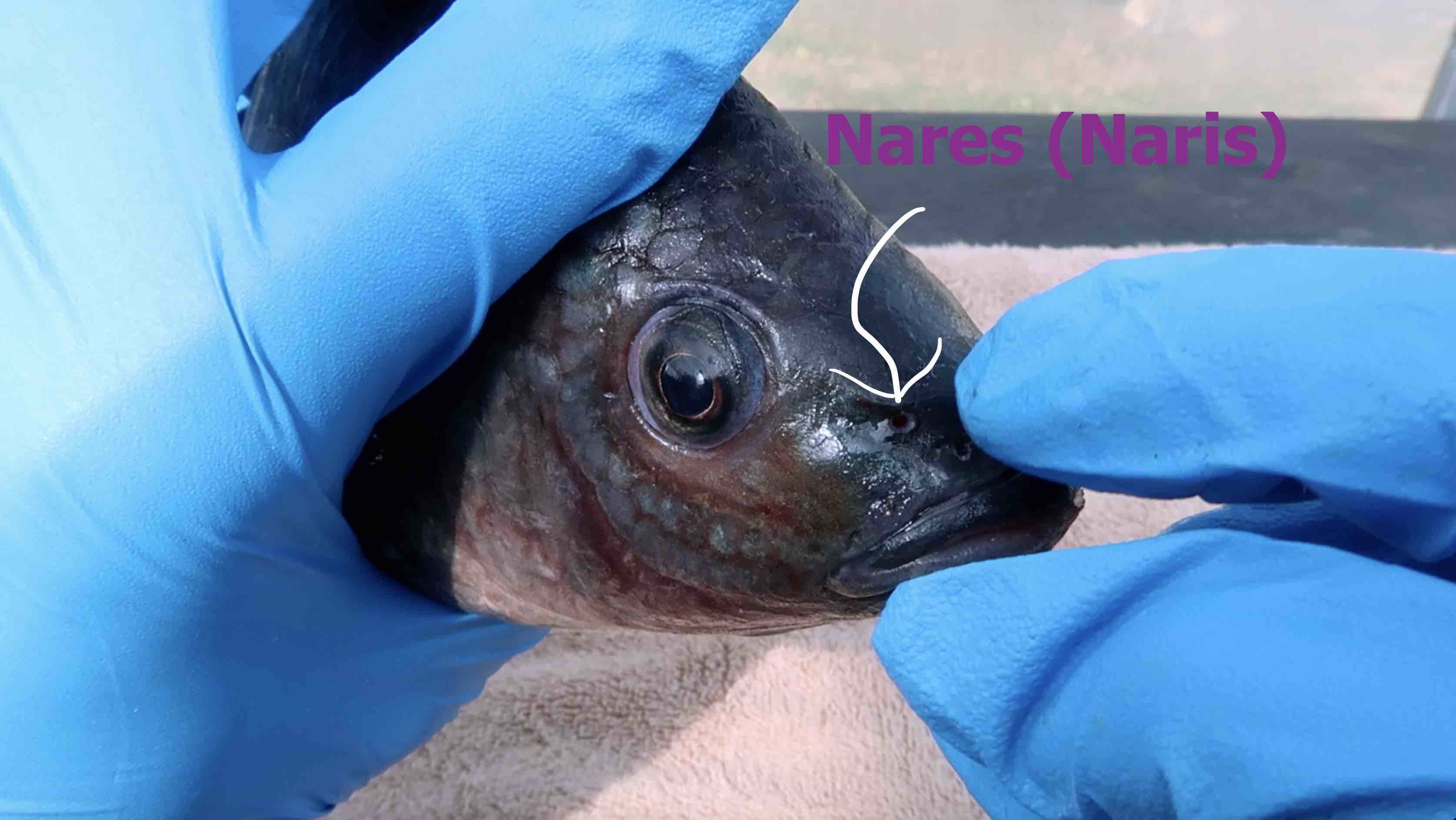 The nares are the olfactory senses of fish and are located one on each side above the mouth and in front of the eyes on tilapia. For many species of fish the nares function as a chemical alarm system as opposed to a vocal alarm system used by birds and mammals (1). German scientist Karl Von Frisch cut a nerve ending at the base of the tail of a minnow which left a black marking that enabled him to identify the fish for later examinations (1). As he placed the freshly operated fish back into the tank with a school of minnows, all the other minnows began to swim frantically away from the marked fish (1). Karl hypothesized that the minnows were able to detect a predatory presence through olfaction from a chemical substance released by the attacked minnow fish (1).

Nares are useful by many fish to aid in the recognition of its own species by the smelling of mucus secreted by the skin of the fish (1). An experiment was conducted where a carp was made from wooden material and placed into a tank with living carp to see what behavior patterns would manifest. The living carp ignored the wooden carp, but when it was coated with skin mucus from another carp they followed it around as if it were their identical species (1). Recognition of similar species by olfaction is particularly useful in opaque and cloudy water where visualization is severely limited.

Olfactory senses have been demonstrated in Mozambique tilapia to be useful when it comes to attracting breeding partners. Female tilapia release pheromones in their urine and feces just before ovulation which attracts males and causes them to display territorial and courting behavior (2). 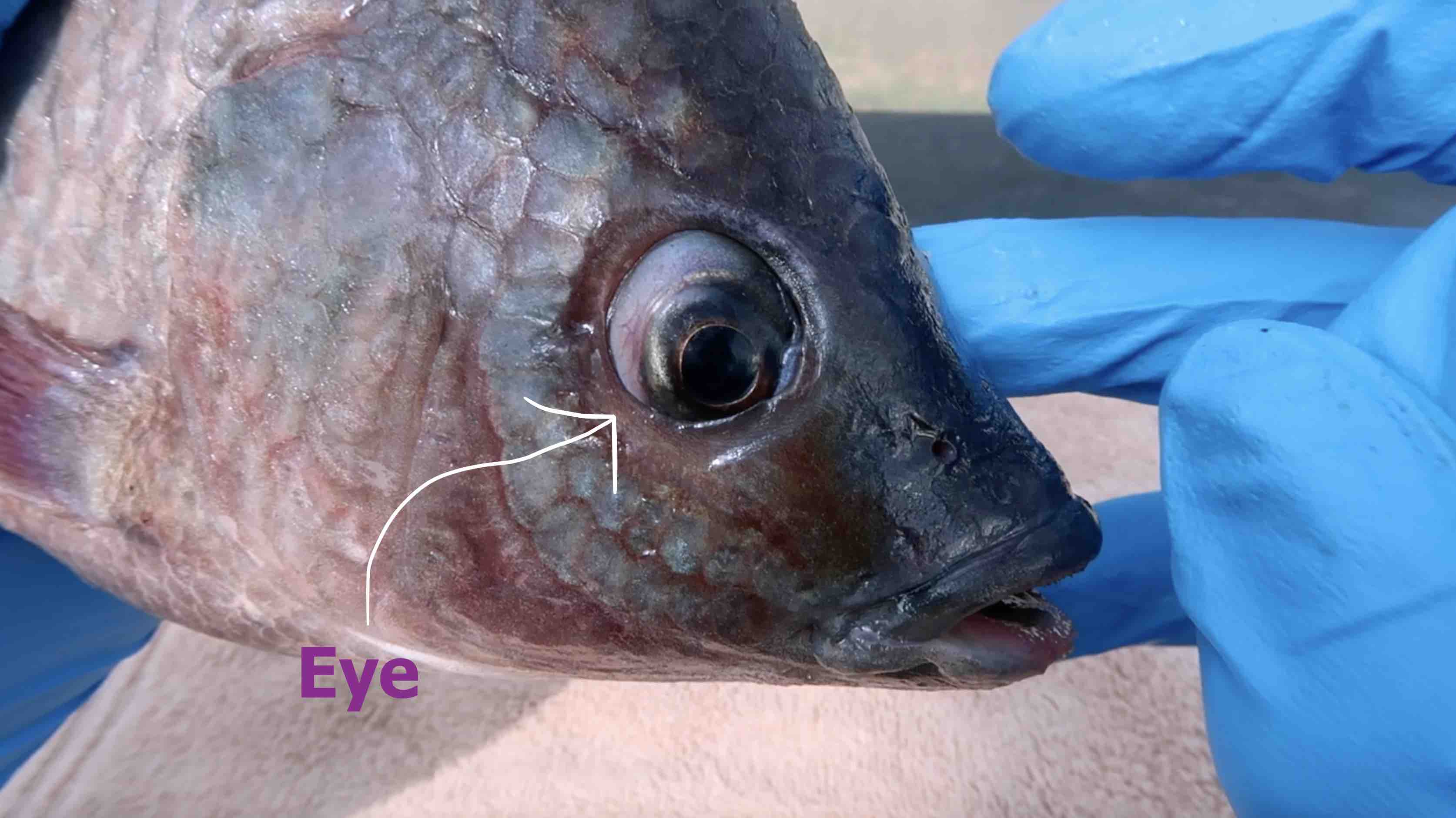 Fish are myopic (nearsighted) and this is due to the roundness of their eyes (3). From an evolutionary prospective a long range of vision is probably not warranted because visibility underwater is poor due to the majority of light being refracted by the water. Fish rely primarily on other factors to locate prey such as olfaction and their lateral line. Their sight becomes of importance at the final moments of approaching the prey just before they strike (3). 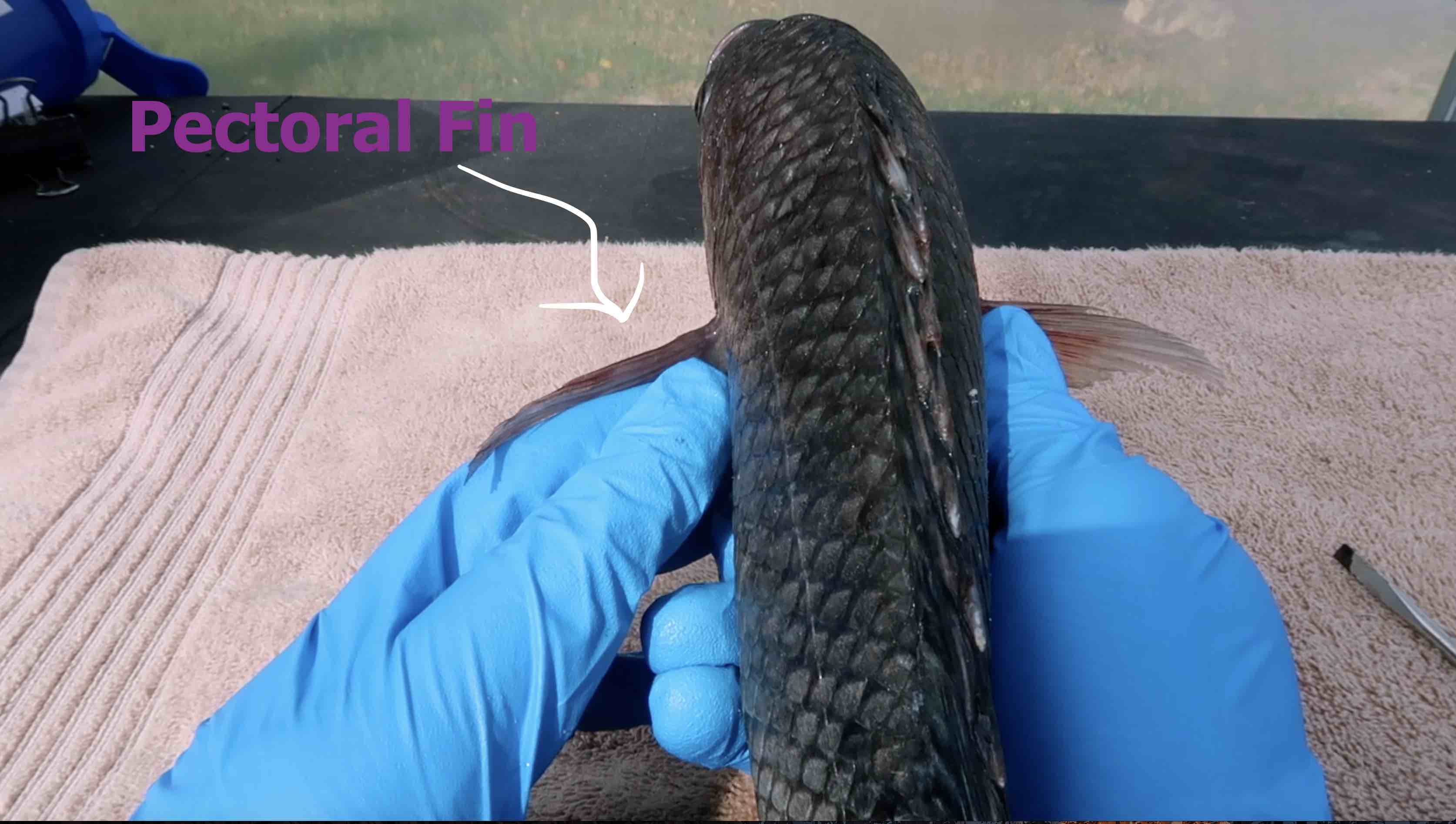 The pectoral and pelvic fins are used as stabilizers and maneuvering mechanisms for the fish. One of the major function of these paired fins is to provide the fish with the ability to make quick stops once the fins are thrusted outward. The pectoral fins can be extended and directed in positions similar to bow-planes on submarines to allow the fish to dive or climb within the water (3). The pectorals can also be extended like oars used on rowboats to maneuver the fish to either the left or right. A great deal of the maneuvering is done using the pectoral fins with some assistance from the pelvic fins, but the primary role of the pelvic fin is to stabilize the fish and keep it from rolling on its side (3). 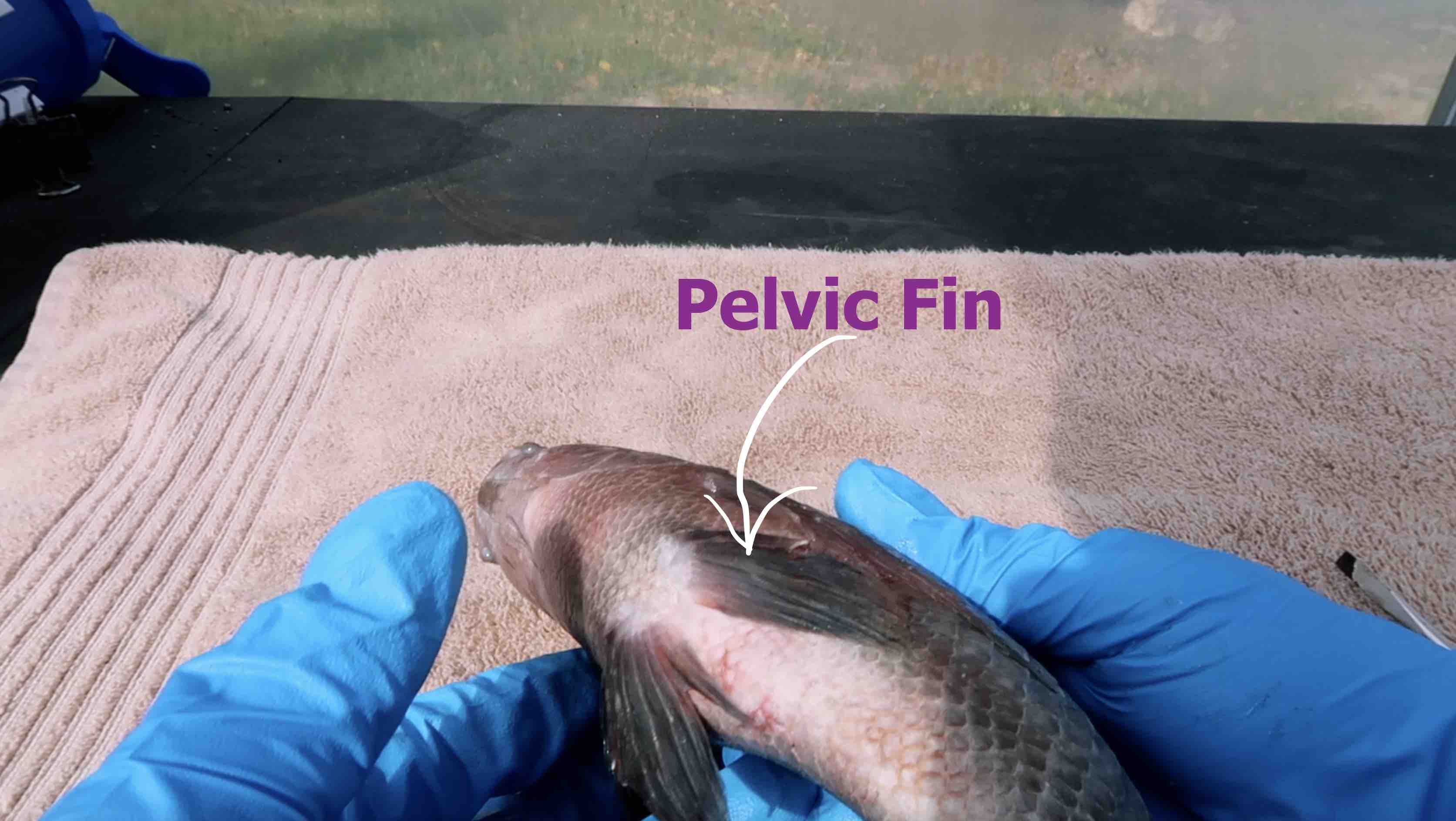 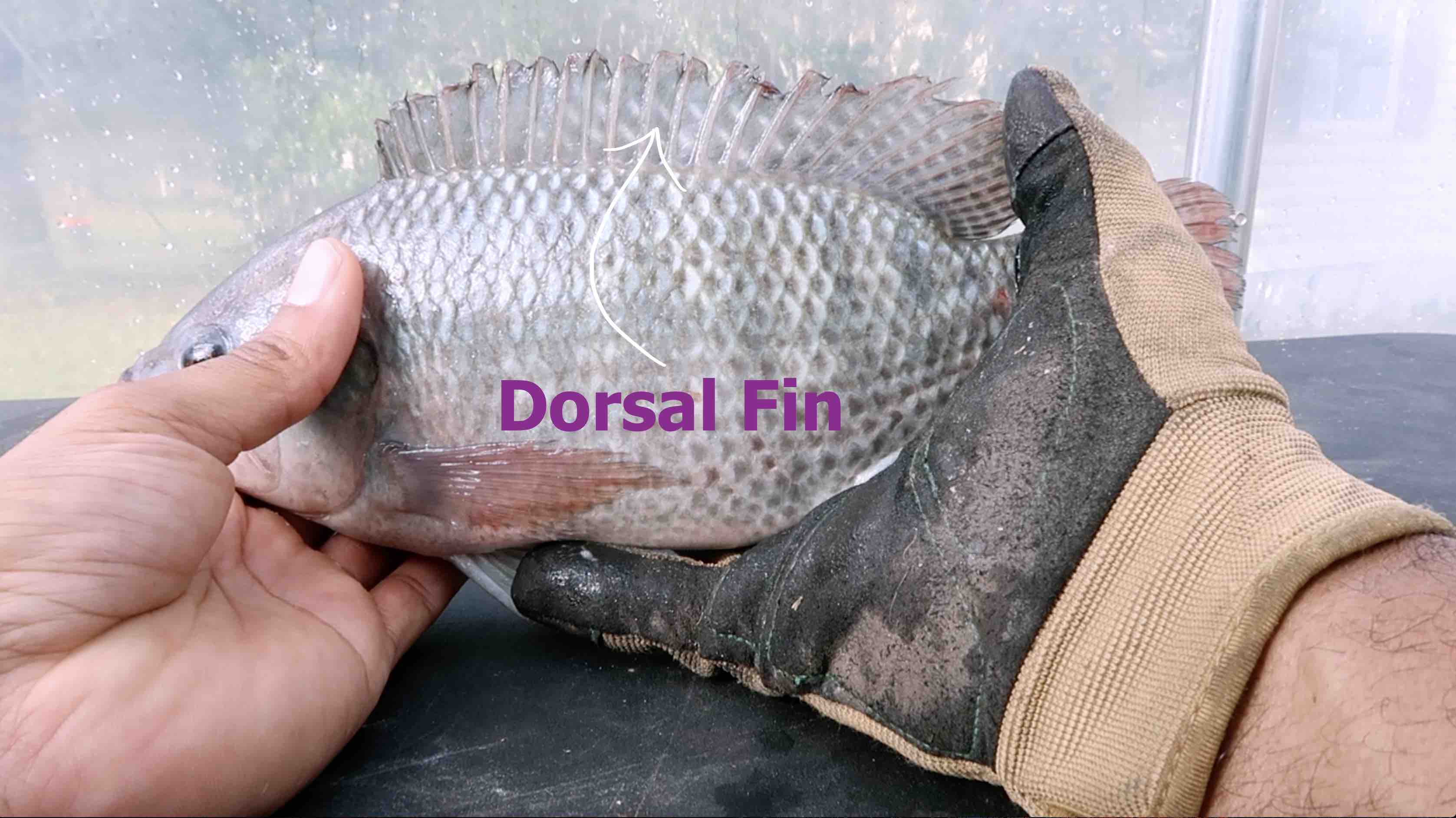 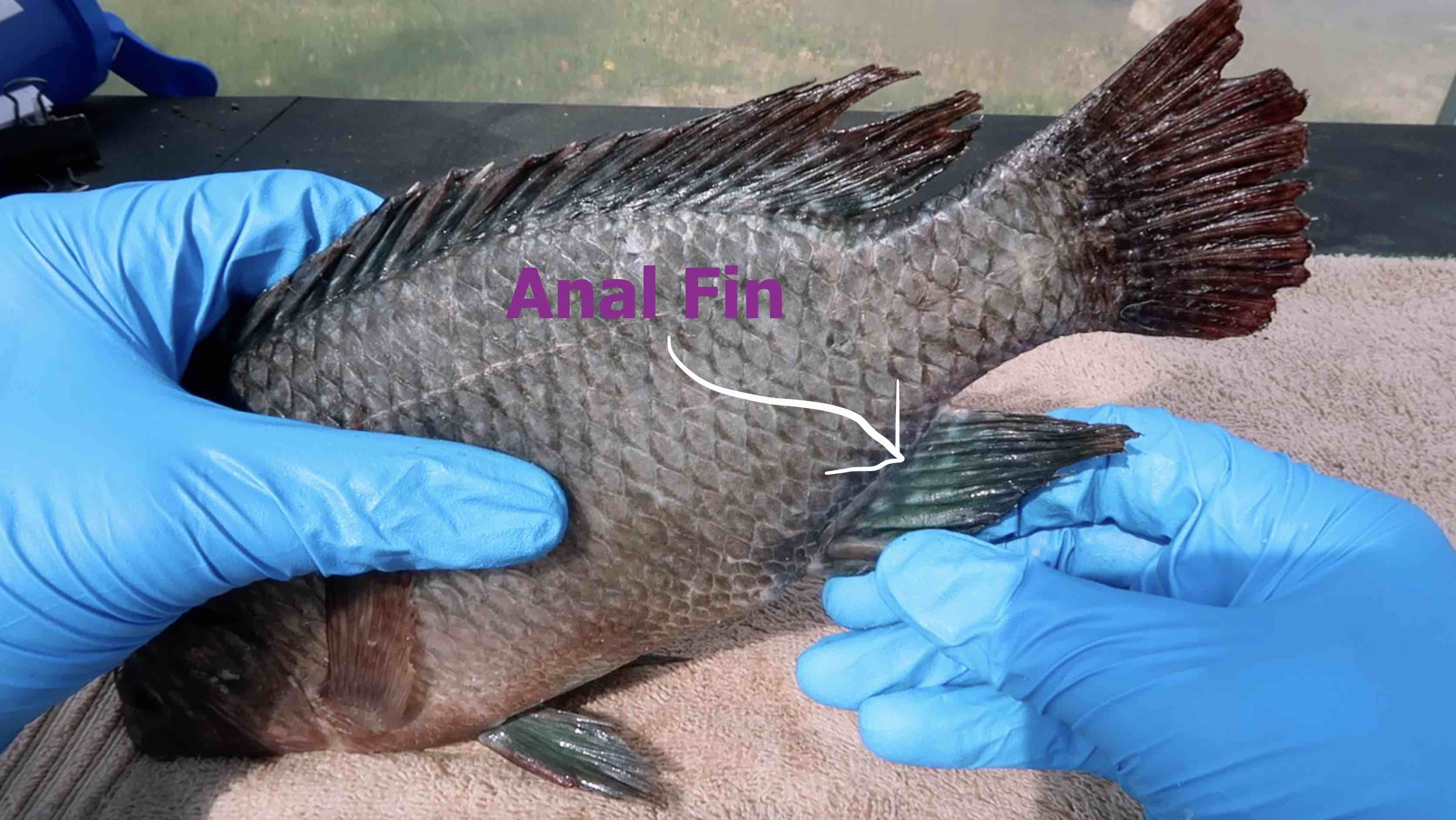 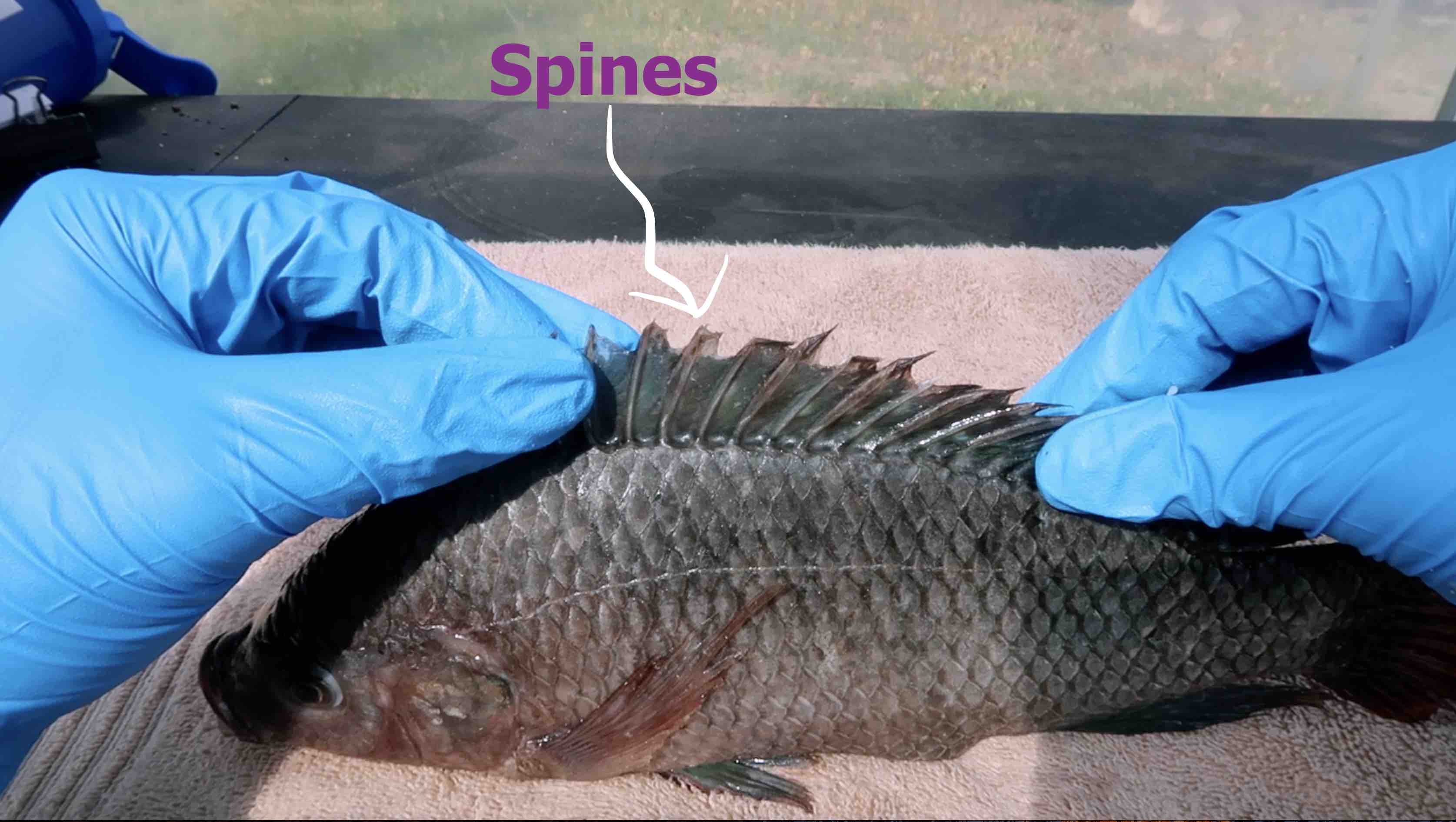 Fish are divided into two groups in regards to the identification of certain fin characteristics. One group is known as the soft-rayed fish which include species of fish that have fins without spines. In the group of soft-rayed fish are species such as trout and cod. The second group of fish is known as spiny-rayed fish which include species that have spines on at least one of their fins. This group includes fish such as tilapia, barramundi, and catfish.

The spines on the fish’s fins are a point of defense and can inflict severe damage if improperly handled. When a tilapia fish is excited it quickly thrust out its’ dorsal fins which have sharp spines attached to them that can pierce through flesh and cause bleeding. The larger the tilapia fish the larger the spines, and the more power will be behind the thrust. Some fish such as lion fish have poison in their spines and must be handled only by trained professionals. Another defensive use for the spines is to create an illusionary appearance of looking bigger to potential predators when the dorsal, anal, and pectoral fins are locked in place. The bigger the animal can appear the less animals there will be that are willing to attempt an attack. 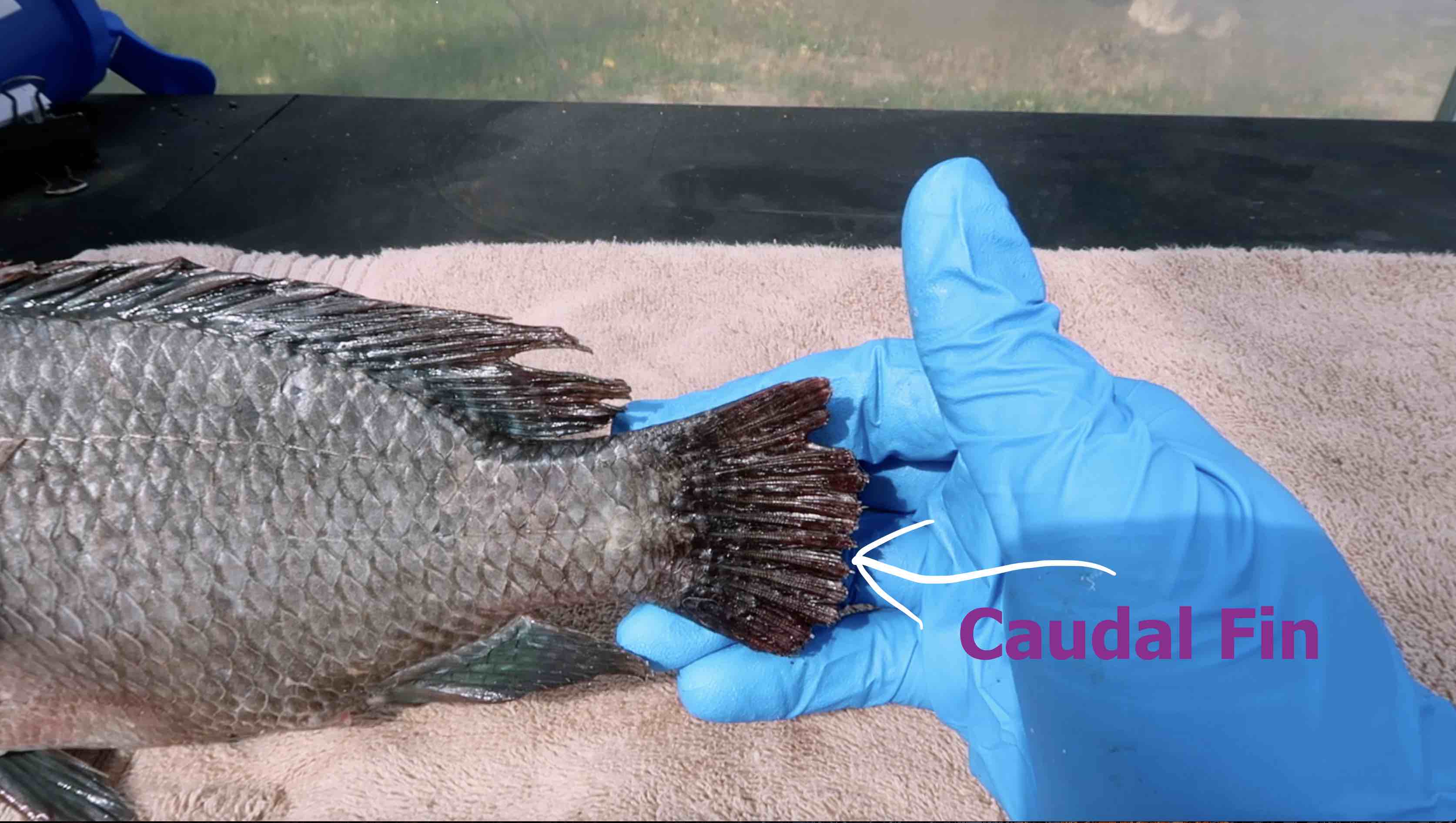 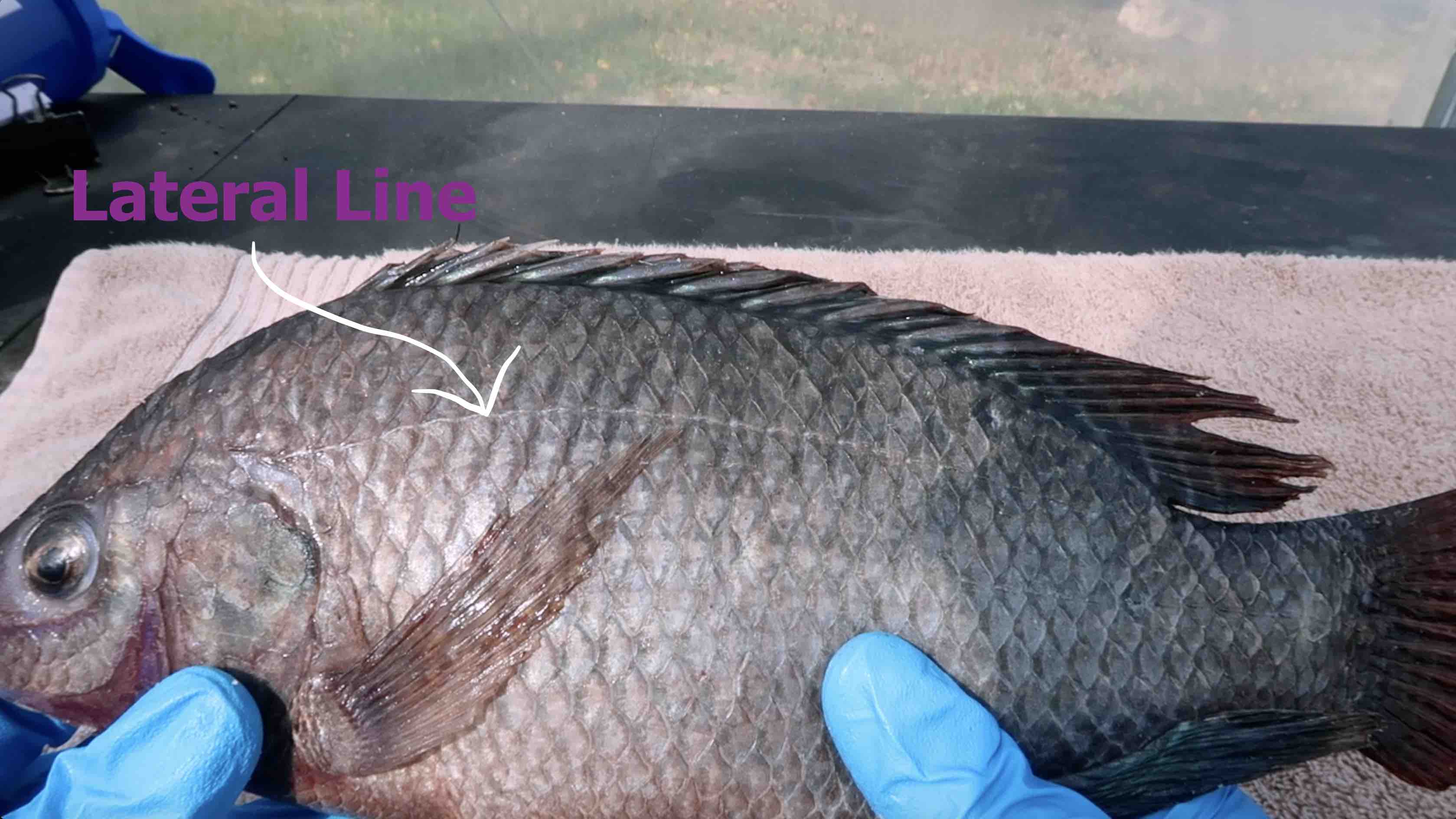 The lateral line is somewhat of a sonar device for fish allowing it to detect the movement of other fish, vibrations within the water, and enables fish to navigate through their environment through spatial awareness which is especially helpful at night or in turbid water. Fish focus on the vibration of prey using their lateral line, which allows them to home in on the prey’s location (5). A single fish creates a single vibrational pattern whereas a school of fish creates a band of frequencies that overlap and create a complexities of vibration which confuses predators on the attack and prevents them from identifying a single fish by using its lateral line (6).